Panna is a 542.66 sq. km. reserve located in the Chhatarpur and Panna districts of Madhya Pradesh, close to the temple town of Khajuraho in central India. Panna was the fifth Project Tiger reserve of Madhya Pradesh and the 22nd tiger reserve of the country under Project Tiger. Located on the banks of the River Ken, the park is lush green with deep ravines, cascading waterfalls and thick teak forests, the Panna National Park is renowned for the tiger, deer and nilgai. The reserve stands hidden in the shadows of the Khajuraho figurines and the famed diamond mines nearby that threaten to strip the area of its vast resources.

Panna has characteristic tropical climate. Summers are uncomfortably hot with maximum temperatures that could rise to 45C, though the season probably affords the greatest chance of sighting wildlife. Winters are cool and pleasant with temperatures usually under 250C with the minimum plummeting to about 60C. The monsoons last from July to mid-September with average rainfall of about 1,423 mm., after which a long, dry spell ensues.

The park is open from November to June, which would be the best season for a visit. The Pandav Falls are however best visited during the monsoon.

Transport
By Air:
The Khajuraho aerodrome is only 27 km. from the Madla Gate at Ken River. Distances of some major airport towns from the Panna National Park are: Bhopal 727 km., Delhi 889 km., Chennai 1,761 km. and Calcutta 1,040 km.

By Rail:
The nearest railhead is Satna station on the Central railway, located 70 km. from the Panna town. Satna is a major railway junction, connected to several important cities and towns in central and western India, including Mumbai (1,540 km.). Jhansi is another alternative, 175 km. from Panna National Park.

By Road:
Both the Madla and the Hinouta gates of the park are at an accessible 20 km. from Panna town, which is located on State Highway No.6, 200 km. from Jhansi and 215 km. from Jabalpur, via Katni junction (125 km. from the park). Madla is 24 km. southwest of Khajuraho, which is another option from where you can reach Panna National Park by road.

Accommodation: Accommodations are available in the vicinity of the park. Another exciting option is to try the tree houses! More conventional accommodation is available at Madla. Another alternative would be to stay at one of the numerous tourist hotels at Khajuraho and plan a day trip to the park.

Khajuraho is one of the most popular tourist spots in Madhya Pradesh. It is famous for its ancient temples that depict some of the finest art in the world. 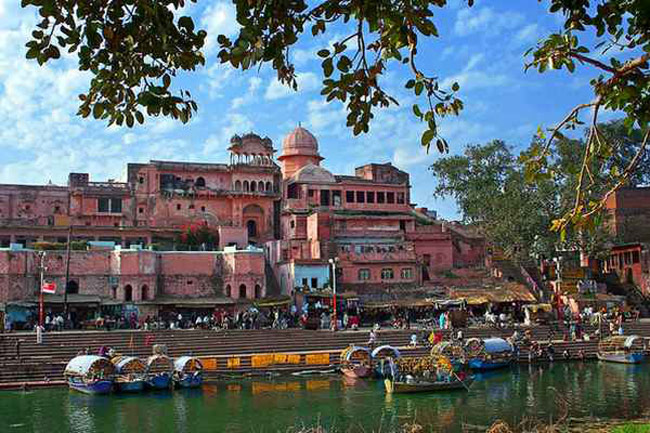