One day tour includes visit to Ambadevi Temple in Nagpur 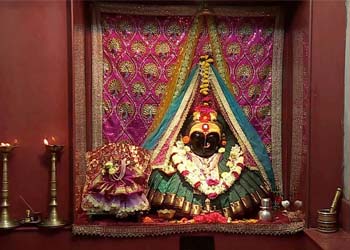 The temple is dedicated to Goddess Ambadevi and lies right in the middle of the Amravati city.
Amba Devi Temple is so ancient that one cannot find even a single mention of it in the old gazetteers. The temple is held in great reverence by Hindus and people from different corners of not only Maharashtra, but the whole of India come to Amravati to pay respect to the Goddess.
One of the major attractions of the temple is the Navratri Festival, when the whole temple gets beautifully decorated. People in thousands, flock to the festival during this time, to catch a glimpse of the Goddess. A huge mela (fair) is organized during this time Legend goes that King Bhishmak’s daughter Rukmini fell in love with Lord Krishna, after hearing the tales of His courage. However, her brother Rukmiya, fixed her marriage with his friend, King Shishupal of Chedi. It is said that Rukmini was kidnapped by the Lord just a day before her marriage to Shishupal, when she came to visit the Ambadevi Temple.
Distance from Nagpur :150 km